The Magicians and How to Grow a Pair 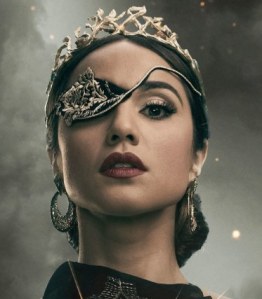 When it comes to strong female characters, the Syfy series “The Magicians,” based on the books by Lev Grossman, offers a treasure trove. The premise of the series is that magic exists and certain people have a talent for it. Young budding magicians usually have no idea that they are, in fact, magicians, but they are acutely aware that they don’t fit in with ordinary society. Many have grown up feeling there is something wrong with them, even though they are usually geniuses of some kind.

At some point these misfit geniuses are invited to take entrance exams for what they think is graduate school. If they pass, they are told the truth: the school is Brakebills School of Magic. There they are put through three years of rigorous training in how to cast spells and learn what their particular magical specialty is, but they are always under the control of senior magicians. If they fail, their memories are wiped and they continue to live ordinary lives—although many are drawn to other “hedge witches,” underground, unsupervised magicians who try to learn spells from each other.

The hedge witches of the series include Julia (Stella Maeve), who is raped by a trickster god she conjures in an attempt to connect with an earth goddess—a trauma that has unexpected results, both negative and positive—and Kady (Jade Tailor), on a mission to protect hedge witches while sorrowing the loss of her true love. The students include Alice (Olivia Dudley), who is brilliant at spells but clueless when it comes to people and causes great harm when she only means well, and Margo.

From the get-go, beautiful, sultry Margo (Summer Bishil) has been a full-on bitch, biting out snarky comments to all and sundry, regarding people and events with suspicion, with her head tilted back, nose in the air, eyes half-lidded.

Her only real friend is Elliot (Hale Appleman), who is equally bitchy. Both had fathers who emotionally abandoned them as they grew into adolescence and their true personas emerged. Elliot’s farmer father couldn’t handle having a gay son. But Margo’s story is more complicated. Her father adored her when she was a little girl, calling her his “princess” and telling her she could be anything she wanted when she grew up. But as Margo comes to understand, “the world makes you choose. You can be pretty, or smart, or strong . . . but not all three. If you are, they call you a bitch. A slut.” Margo is all three, and this scares men away—including her dad. Margo refuses to dial herself back, but the rejection hurts, so she adopts a hard surface, a psychological suit of armor to hide the pain.

After Quentin Coldwater (Jason Ralph), the nerdy protagonist of the series[1], discovers that Fillory, a Narnia-like land portrayed in a series of books he became obsessed with as a teenager, is real, the young magicians learn how to travel to Fillory. Like the human protagonists of the Narnia stories, Quentin, Alice, Elliot, and Margo become the kings and queens of Fillory.

Margo and Elliot take to rulership instantly, but Alice and Quentin struggle and eventually abdicate. After Elliot becomes possessed by an ancient god, Margo rules alone. As High King of Fillory, she never hesitates to make the hard decisions—even sacrificing an eye to keep Fillory safe and then rocking some amazing bedazzled eye patches.

In the episode “All That Hard Glossy Armor,” Margo comes to realize that the traits that alienated her father are not just the traits that make her uniquely herself, but are the ones that have served her the best in life. Embracing her bitch-spirit fully allows her not just to achieve the first step in her quest to save Elliot, but free a village of women from domination by their men, who have convinced the women that giving way to their feelings—no matter how justified—might literally kill those men.

The fear of strong women, particularly women who “flaunt” (that is, refuse to hide) their strength, runs deep in our society. Any woman who has ever asserted herself even by simply saying “no” to a man knows what it’s like to be called a bitch. The concerted efforts to cast women who have achieved political office as threats to society as a whole reflect this fear of strong women.

There are many roots to this fear. Perhaps the most basic is the infant perception that Mother is the source of both life and death—for if Mother, the source of life, withholds her milk and her warmth, the baby will die. This idea that the loving and nurturing and giving woman is safe while the one who says “no” is a threat can persist in our unconscious long after we grow beyond the need for mothering.

Self-aware, mature, capable men and women are not threatened when others say “no, I will not take care of you, you’re a grown-up so act like one already.” In fact, it’s expected that Father will say this  sooner or later. But we judge women who refuse to nurture, and most women have internalized this judgment and feel shame when they say “no.”

We see just how far Margo has come in accepting herself at the beginning of the next episode, when Quentin whinges to her about a task he’s been assigned as part of the effort to save Elliot. He doesn’t want to do it because it means working with Alice, who makes him uncomfortable. He tries to get Margo to take his place. Margo tilts her head back, regards him for a moment, drawls “Grow a pair of tits, Coldwater,” and walks away.

[1] In another brilliant episode, “Side Effects,” the show questions the idea of a single person being the “hero” of any story, outright stating that focusing on one—typically, white male—character as the hero not only reflects white male privileged thinking, but misses out on the importance of other characters, each of whom is, after all, the hero of their own story.