God Friended Me: Riffing on the “Procedural” 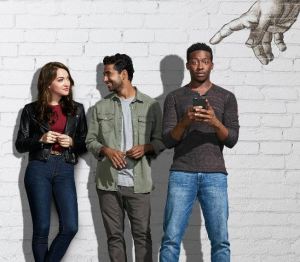 I’ve become addicted to “God Friended Me,” a show about a young man, Miles, who gets a friend request from God on a Facebook-like platform. Miles n happens to be an atheist (he has a popular podcast on that topic), but he plays along .. .only to be increasingly drawn in as “God” keeps sending him friend suggestions that turn out to be serendipitous either for him and his friends, or for the suggested “friend” who turns out to need just the help Miles can provide.

Soon Miles and his friends Kara, an investigative journalist, and Rajesh, the requisite computer whiz every procedural show needs, become determined to find out who is behind the God account. Each episode thus becomes not only about why and how the latest friend suggestion needs Miles’s help, but is also a procedural plot where the group identifies and follows up clues to the identify of “God” and how “God” knows just who needs the help they can provide.

Most procedural shows are necessarily grim–even when played for laughs, as with “Castle”–because they are almost always about murder. Another feature that seems to come into play sooner or later is the conspiracy: someone or some organization behind the scenes is manipulating events for reasons that are almost always nefarious. The conspiracy is not limited to procedurals, either; “Star Trek: Discovery” just spent its second season uncovering the conspiracy behind Section 31, the Federation’s black ops wing.

“God Friended Me” takes a fresh approach. It is a procedural in that the friends must solve a kind of mystery each episode, but there are no murders: the central question is always “how can we help?” Usually the first attempt goes awry and the friends must dig deeper to figure out a better way. This foreshadows the other, larger procedural question of “who is behind the God account?” The friends become convinced that they are closing in on the person behind the screen, only to find at the end of the season that they’ve been cleverly misdirected into chasing down the instigators of an entirely different effort.

So there are not one but two conspiracies in play (at least). But neither is nefarious; both are efforts to promote a better world for all.

Meanwhile, Miles’s views on God and faith are challenged. He begins opening up his mind a bit on these issues. When he shares his thinking on his podcast, he promptly loses half his listeners, most of whom accuse him of being a traitor to the cause. But over time he gains back even more listeners, people who are also wondering about and exploring the grey area between belief and absolute rejection. As part of this work, Miles reconciles with his father, an Episcopalian minister, and in the last episode of the season, Miles invites his father to chat with him on the air.

This is a brainy show, and not because of all the technobabble about codes and hacking. It’s brainy because it tackles the big philosophical questions head-on. But it does so in a brilliantly accessible format. The diverse cast discusses thorny moral issues as they sit in Internet cafes and bars or walk through city parks, just  as they might discuss their views on music.  Each episode raises a question about who we really are, how human beings ought to behave, but roots the question in a real problem we are all dealing with right now: homelessness, immigration, corporate control of the media, etc.  Each of the characters–who are, for the most part, flawed yet likable–faces their own issues with relationships and careers; each has been challenged at some point during the season to make a moral choice, but it’s always in a context that makes sense, that we can relate to.  I look forward to where the writers of this show will take us in future seasons.