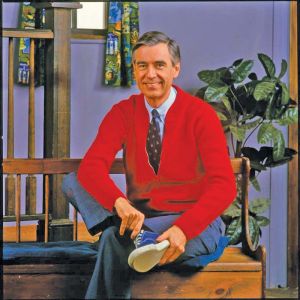 Research conducted by a former chief of brain biochemistry at the National Institutes of Health, Candace Pert,  found that our emotions not only change our own body chemistry; they change the body chemistry of the people we interact with. Our feelings send electrical signals that travel not just to receptors on our own body cells, but to receptors on the cells of others nearby.

Put more simply, as Pert said: “We’re not just little hunks of meat. We’re vibrating like a tuning fork — we send out a vibration to other people. We broadcast and receive. [We] are connected to everybody else.”

The emotions we feel leave a wake that touches everyone we pass.

Nowhere is this more evident than in the movie “A Beautiful Day in the Neighborhood,” starring Tom Hanks as Fred Rogers. This is not a biopic–there are two excellent biopics on Mr. Rogers already in existence, if you want to know more about his life. This new movie focuses on Rogers’s relationship with an embittered journalist named Lloyd Vogler (played by Matthew Rhys), based on his real-life friendship with Esquire writer Tom Junod. The way that Rogers interacted with Junod from the start had a profound affect on him; the movie makes it clear that Rogers had this effect on just about everyone who came in contact with him or watched his show.

For me the most telling scenes were not the ones with the journalist and his family. Rather, they were the ones in which we could see the effect Rogers had on every room he entered. In one scene, he and Lloyd are riding the subway in New York. The subway car is filled with the people you’d expect to see: sketchy-looking men in hoodies, packs of teenagers, a couple of cops, some older people. As they become aware of Rogers, the teenagers start singing the theme song to his show, and soon everyone in the car has joined in and is singing away, looking around and smiling at each other. One can feel the bonds being created between everyone in the car.

In another scene, Rogers and Lloyd are sitting in a diner, and Rogers requests Lloyd to sit in silence with him for one minute and think about “those who loved us into being.” Lloyd shrugs, but complies, and over the next 60 seconds we watch his expression shift from skepticism to painful recollection to peace. But at the same time, we become aware of the silence that has fallen over the entire diner as the silence ripples outward from Rogers to Lloyd, to the nearby tables, and finally the entire diner.

Richard Wilhelm, the translator of the I Ching, told Carl Jung the following story:

There was great drought. For months there had not been a drop of rain and the situation became catastrophic. The Catholics made processions, the Protestants made prayers, and the Chinese burned joss-sticks and shot off guns to frighten away the demons of the drought, but with no result. Finally the Chinese said, “We will fetch the rainmaker.” And from another province a dried-up old man appeared. The only thing he asked for was a quiet little house somewhere, and there he locked himself in for three days. On the fourth day the clouds gathered and there was a great snowstorm at the time of the year when no snow was expected, an unusual amount, and the town was so full of rumors about the wonderful rainmaker that Richard Wilhelm went to ask the man how he did it. In true European fashion he said, “they call you the rainmaker, will you tell me how you made the snow?” And the little Chinese man said, “I did not make the snow, I am not responsible.” “But what have you done these three days?” “Oh, I can explain that. I come from another country where things are in order. Here they are out of order, they are not as they should be by the ordinance of heaven. Therefore the whole country is not in Tao, and I also am not in the natural order of things because I am in a disordered country. So I had to wait three days until I was back in Tao and then naturally the rain came.”

In the movie, Rogers tells Lloyd that he is no saint, that he struggles and gets angry, and that there are things he does to deal with those negative emotions. We get to see all the ways that he gets himself back in order when life gets to him: swimming, playing the piano, reading Scripture, and praying. He knows the best ways to deal with stress include exercise, music, and meditation–and a sense of connection to something greater than oneself.

He did all of these things every day of his life. These practices helped him to be the calm and loving person who looked out through the camera lens into the eyes of his audience. His wake was so strong that he didn’t need to be in direct proximity to have an affect on others–but when he was around, he changed the energy of everyone nearby.  Including the theater in which I saw this movie. People smiled at each other as we left, and the group I was with all reported feeling exalted and a desire to be much nicer to others.

I’m not sure this movie would have worked as well without Tom Hanks in the central role. Hanks always looks like Hanks, to me; he doesn’t disappear into roles like some actors do, and he’s too beefy to physically evoke the 143-pound Rogers. But by all reports Hanks is a genuinely nice person himself, and I could believe that the man sitting in the subway and in the diner had that effect on those around him.

This movie is a much-needed reminder in these days of polarization that the best form of social activism is to bring our thoughts and actions into congruence with our deepest values. Some of us may believe that we need to bring back old ways to get to those values. Others may believe that we need to make progress toward an ideal future before we can see those values fully realized. The message of this movie is that we can embody our values here and now: the only time we really have, the only way in which we can truly be effective.