The Subversive Subtext of the Royal Wedding 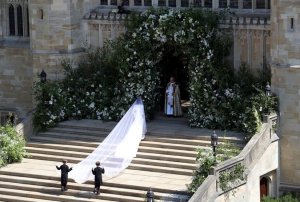 At one point in my dissertation “Recurrent Themes in Women’s Narratives,” while talking about 18th-century English novels in which a worthy woman from a lower stratum of society captures the heart and hand of an upper-class man, I wrote this:

It might be easy to dismiss such a plot as romantic wish-fulfillment, but the idea of a lower-class woman marrying into nobility was radical for the time. As the woman’s children would take over the family and inherit the property, these romantic novels promoted a gentle kind of revolt against the existing class structure.

I was reminded of this as I watched the wedding of Prince Harry of Great Britain and Meghan Markle, a mixed-race American woman. Americans have been recolonizing Britain for quite a while now through marriage, a tradition that began with the marriage of the Native American Pocahontas and John Rolfe early in the 1600s. Edith Wharton’s The Buccaneers and “Downton Abbey” both are based on the wave of American heiresses who crossed the pond in the late 1800s and traded their considerable dowries for noble titles, including Jennie Jerome, the mother of Winston Churchill.

But often the woman has no other dowry than herself, as with Elizabeth Bennet of Pride and Prejudice—and Meghan Markle. And there are other objections to the marriage than the bride’s social status. Like Elizabeth Bennet, Meghan has siblings who make us wince when we read about their behavior. The moral of these stories is that the woman who can stand firmly in her own integrity no matter how others may try to intimidate or embarrass her will shine with her own light—and the right partner for her will see her as she truly is.

The new Duchess of Sussex is also the latest figurehead of a rebellion that has been going on for a century now within Great Britain. The Church of England, a/k/a the Anglican church, has traditionally frowned on marriage with a divorced person whose ex is still living—ironically, as a major reason the Church came into being at all is because Henry VIII wanted to divorce his wife and marry another woman. When Edward VIII wanted to marry a divorced woman, the Church said “you cannot do that and remain king.” Determined to be true to “the woman I love,” he abdicated his throne in 1936. Less than 20 years later, Princess Margaret, sister of Elizabeth II, wanted to marry a divorced man; the Church again said no. Margaret chose to give up Peter Townsend and stay a member of the royal family, but regretted her decision all her life.

The issue of divorce resurfaced in the 1990s when Charles, the heir apparent to the throne, divorced Princess Diana. A few years later, he announced that his relationship with his long-time lover, the divorced Camilla Parker-Bowles, was “non-negotiable.” But it wasn’t until 2005 that he was able to get the consent of his mother (the reigning monarch must approve all royal marriages), the government, and most importantly, the Church, and marry Camilla—albeit only in a civil ceremony. And one of the reasons why the Church allowed the marriage at all was that Charles’s heirs would remain his sons from his first marriage.

Another decade further into the 21st century has seen the Church’s stance soften even more. Prince Harry, while no longer in direct line to the throne, has not only been allowed to marry a divorced woman, he has done so with the full rites and blessing of the Church of England. Moreover, during that ceremony, a bishop of the Episcopalian Church (the American cousin of the Anglican Church), stood up and schooled the British on what really matters in marriage and in life: love.

So this latest wedding represents subversion on many levels. The ruling triumvirate of Great Britain—royal family, government, and Church—have learned over the last century to change with the times, and Meghan walking, beautiful and alone, into the church is the symbol of just how far they’ve come.